When you visit Pahalgam, you feel like stuffing your stomach with various Kashmiri cuisine that includes family meal as well as the banquet which is called as wazawan in their local language. There are few must-have cuisines such as the roganjosh, yakhni, and Gushtaba. The dish known as Gushtaba are the meatballs that are served at the end of the wazawan.

Tourists can pick either vegetarian or non-vegetarian. If you are a vegetarian, then you can have some dum aloo as well as some other food including mixed vegetable called 'chaman'. The city has several restaurants, along with the dhabas, even coffee shops are seen. Also, you can find all types of hotels and guest houses which will have their own restaurants. During your stay, make sure you consume the delicious Kashmiri food, that probably you won't be able to find such tasty food elsewhere.

One best diet at Pahalgam is the rice; it is kind of thick and bit sticky type of food that is included in the Kashmir and has been given top priority in the valley. While, you can also find non-vegetarian items such as the mutton and chicken, besides the turnips spinach, as well as the special fish, which is really a very good combination. Apart from the sweet dish, Kashmiris would like to consume the Kahva after their meal. This food is said to be a mixture of the green tea, with addition to the cardamom and cinnamon, including the nuts, also the Saffron and Kashmiri roses have been added to these.

There is nothing very special in Pahalgam, as most of the food served here is the Kashmiri food, which is very delicious. Such food is normally consumed by the Kashmiri people or the people of Pahalgam.  But for tourists, it would definitely be the special food. When it comes to the part of restaurants, you can find that 'the city of Pahalgam' is rich in providing various spectrum of  restaurants. Here you can have tasty Kashmiri special aromatic spices dishes which have the excellent 'Kashmiri food'. Moreover, these eating centers also serves different kinds of Punjabi, Gujarati as well as some other  Chinese dishes. While dining makes your stay more better, and 'Houseboat Restaurants' is said to be a remarkable experience.

The local food of Pahalgam actually serves different traditional dishes, among which the main ingredient is the rice. Such type of rice is said to be cooked either with the non-vegetarian food (mutton and chicken, fish, etc.), or generally with the vegetables just like 'Pulav' which can be eaten in different parts of India, especially in South India.

Dam Aloo: This is most favorite dish for the vegetarians, and Dum Aloo is said to be a typical Kashmiri dish, that gets the name as dum due to the strong and spicy taste. To this even some dry fruits are added to increase the dish flavor. 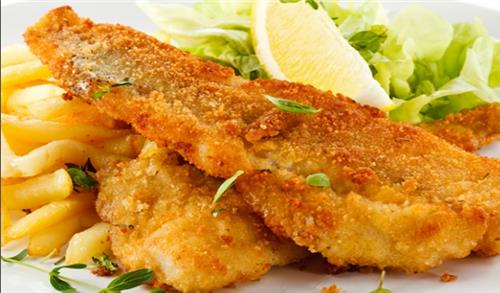 Troutbeat: Suppose you like the fish dish more, you can go in the direction of the Troutbeat cafe without thinking. This is the perfect place for you to have fish, and the center is most popular for the rainbow dish as well as the food like the brown trout. Such type of vegetarian dishes are prepared over the Lidder River.

Yakhni: This dish called Yakhni is said to be cooked using the gravy that is mixed with curds, which is said to have the extreme creamy texture. So, it is recommended to have this great meal without fail, and after having this meal, another delicious food must be consumed and that is none other than Kashmiri kahwa. If you eat a cup of this Kahwa, you will get a heavenly feel.

Rogan Josh
Kashmiri Wazwan cuisine is basically the very popular non-vegetarian dish, while Rogan Josh is found to be the best signature dish. Such kind of spicy curry cooked with the red lamb is the very ideal food that can be consumed with the saffron rice.

The very common dish available in Pahalgam is the Wazawan. It is said to be a complete meal in itself. This type of Kashmiri food is said to be a tiny simple meal that can be served to either a single family or a 15 to 36 wedding course wedding banquet, and is well-known as 'Wazawan'. Non-vegetarian dishes are somewhat treated as the sign of plushy hospitality in Kashmir. While  serving Wazawan or banquet, you will find just 1 or 2 vegetarian dishes and no more dishes. Such kind of food is called as 'trami' or 'tramis' that have brought all the bowl up with rice, that are served with the sikh kababs, as well as the tabak maaz, also the methi korma, as well as the safed murg and the zafrani murg is also seen. Wherein, these dishes like yogurt is served with chutnies separately in the small earthen pots.

The common dishes of trami includes the tabakh maaz and rista, the delicious rogan josh, tasteful daniwal korma, as well as the aab gosht, even the marchwangan korma and Gushtaba are commonly visible in a trami with many preparation done while preparing a 'Wazwan'. You can also meet the head chef (popularly known as 'waza') who strictly supervises every dish.

The tourist who visits the beautiful Pahalgam city, must eat the kahwah, which includes the ingredients like the saffron, green tea, and some dry fruits. This wedding banquet is generally served at weddings and parties. 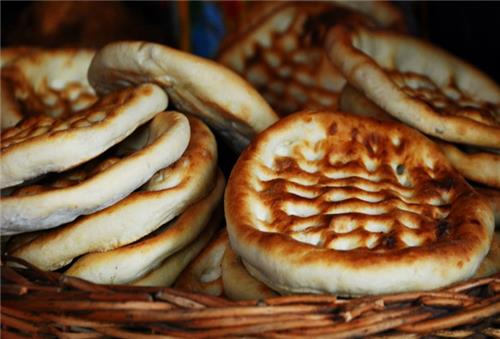 You can even visit to a Kashmiri bakery, which produces several types of breads that are rarely produced elsewhere. One can also eat Sheermal and Baqerkhani, which are said to be the two different types of breads for the breakfast. Even some other varied kinds of breads include Tsot and Tsochvoru, which are found to be the small round breads on which, few of the poppy and sesame seeds are cleanly  washed with the salt tea. Apart from this, the lavas – a cream colored unraised bread and kulcha are the different kinds of short-bread, with the sweet or savory, that were beautifully decorated with the poppy seeds.

Pahalgam has many restaurants, dhabas and coffee shops and all the hotels and guest houses have their own restaurants. Kashmiris usually love to drink the type of beverage called Kahwa, instead of having desserts. While it is a kind of brew or green tea, in which cardamom, cinnamon, as well as the nuts, the saffron and Kashmiri roses have been added for better sweet and taste.

Restaurants in Pahalgam best serves the cuisines like the Punjabi and Gujarati, as well as the Chinese cuisines with attachment to the local fare known as the 'Kashmiri'.

Nathu Rasoi: It is a kind of budget restaurant (dhaba) that specialized in providing the North Indian food. Such food is very much recommended by the locals, though the food center opens especially during the peak season. 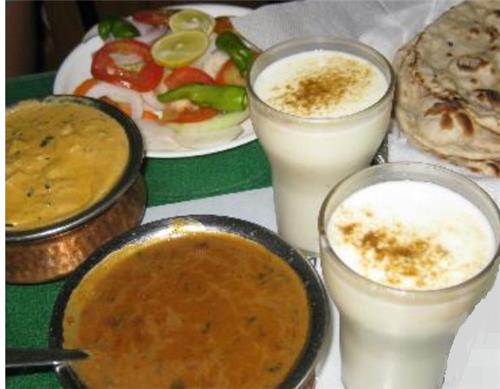 Dana Pani: It is a type of vegetarian restaurant that has been involved in serving various delicious North Indian food at a very reasonable prices such as Rs. 100-150/- price per off-season, and Rs.50 is charged for a Masala Dosa. While fixed meals arrive at just Rs.75/-. And you have to eat Kulfi which is a must try in this restaurant. Punjabi Rasoi' is next to the Nathu Rasoi.

Comments / Discussion Board - Food in Pahalgam